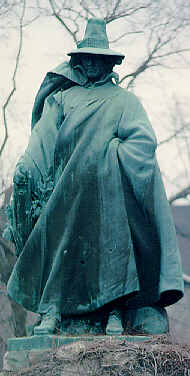 On the edge of Salem Common stands a statue – often mistaken as a witch in a self-pleasuring posture – of Roger Conant: father of Salem and verifiable pilgrim.  It pains me to imagine how many scrapbooks filled with images of Salem day-trips misrepresent the man responsible for transforming Naumkeag – the place of the eel – into the new world’s Jerusalem, the “foundation of the Commonwealth,” and superlative center of trade for one of the nineteen “witches” who got caught up in the mass hysteria of 1692.  If those day-trippers would stay a little longer, dig a little deeper, read a plaque or two, they’d come to realize that our New England village owes far more to pilgrims (of both the square buckle and modern varietals) than witches.

I go to great pains to make sure guests enjoying my  Salem hospitality understand that there were probably no witches living here during that infamous single year of 1692 and that those who ply there trade on Essex Street today do so more with an eye on the dollar than on providence.  Then, I make sure my guests take in the spoils of the East India Marine Society on display at the Peabody-Essex Museum and the privateered 18th century scientific texts housed in the bowels of the Athenaeum to drive home the point that Salem was one of the most important ports in the world at the height of the China trade.

I’ve found that those of us who call Salem home today are equally worldly.  I’m terrified by the number of Salemites I have met who have spent some portion of their life in Kansas City; on my little dead-end street alone, five. Wine-soaked dinner parties open with a Polish blessing from which conversation flows to kibbutzim, Brazilian cow hides, and Dominican chocolate.

And so, in the spirit of Roger Conant, my worldly neighbors, and the modern-day witches who have made their pilgrimage to this historic village in order to keep Salem’s economic engine churning, I’ve decided to leave.

From Naples, Florida, I write, looking forward to deep sea fishing and organic farming as I make preparations to walk the ancient Way of St. James – El Camino de Santiago – across Spain, to trek across Northern Africa, and work and live on an Israeli Kibbutz.  I’m not sure how many grand adventures one lifetime can support, but do know that I intend to walk to the edge of that cliff.

Maybe in the next 300 years ignorant tourists will mistake Mr. Conant for one of the wanderers who enrich our contemporary life in Salem.  A mistake I could probably live with.