This piece is cross posted on North Shore ArtThrob. 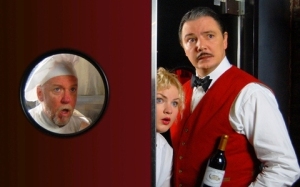 Food is a profoundly powerful vehicle: for vitamins and minerals, of course, but also for social conventions, cultural values, and personal proclivities.

In Michael Hollinger’s An Empty Plate in the Cafe du Grand Boeuf, playing at the Salem Theatre Company through December 17, the food as vehicle conceit is alive and well.  “A comic tragedy in seven courses,” Hollinger’s play takes us to the world’s greatest restaurant in Paris in 1961.  There’s only one customer and he’s determined to die of hunger.

Through a menu of seven courses, the STC’s dynamic cast brings vigor to a script that is perhaps more clever than caring.  And when they finish serving their final dish of adjectives and adverbs, we’re still hungry, if not for bon mots and repartee, then for calories and company.  In my case, that meant it was time to plan a dinner party.

A few days after the preview performance I attended, I created a menu inspired by the menu that served as a framework for the play itself.

As an opening act we had an absurdist soup: garlic with butternut squash and saffron.

The soup was followed by an existentialist entree: chicken a la Ritz with poached eggs in a spinach souffle.  (The chicken came to the table first, but I poached the eggs in advance.)

And to close, I conflated the surrealist cheese course and tragic dessert by serving a goat cheese sorbet.  (“Tragedy,” of course, being derived from the Greek “goat song.”)

Like the play itself, my menu abounding in nuance and wit, ultimately lacked a certain intuitiveness.  The only reason these courses came together was to conform to a predetermined outline and they fit together more as a consequence of their intellectual capital than distinct flavor profile.

All of this is not to say, that either lacked any degree of satisfaction, however.