Mountains (as opposed to hills) should be craggy and inhospitable.  Towering, looming, leering.  A reminder of the limitations of humanity’s ability to exercise its dominion over the natural landscape.

Do not enter without  training, equipment, an acknowledgment of your own mortality and epic hubris. 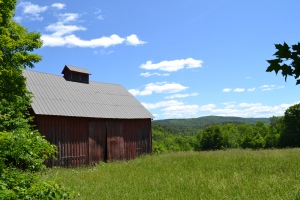 Nestled in the bucolic valleys of Vermont’s Green Mountains are quintessentially American villages: organized around a church building, racially homogeneous, a strong sense of civic pride.  The types of places you’re not surprised to run into a town alumni parade disrupting cross-state traffic.

In these green mountains, you can walk from one village to the next, stop in an inn for refreshment or a country store for artisan candles and cheese.  It’s revolutionary, traditional, American, exotic.

The hot air balloon is the oldest human-carrying flight technology.

They pull our eyes above the horizon, and lift our feet from the ground.  They allow us to subvert the laws of gravity, though not to control our course.

At an annual hot air balloon festival, the village green is blanketed with a rainbow of nylon as dozens of balloons inflate and bathe us in unnatural and transforming color.

We lift up our eyes – it is only natural – to the mountains and the balloons. To the color and the majesty.  The fear and possibility.  The limitations of our control.

Occasionally we find there on the horizon a dwelling, a place of restoration.  There is bread and wine. Fire. Copies of The New Yorker, and an authority on sleep.

From where does our help come?