I thought of attending an official, expensive, fancy menu in Boston.

But then, I read on eater.com about a provocative new ad campaign for TGI Friday’s “endless apps”  and thought purquois pas? If we can celebrate the tradition of eating in the French-style with a Caribbean or Asian or Quebecois accent, why not with the distinctive, nutritionally dubious, commercially overwrought inflection of suburban American fast-casual dining?

In truth it’s a tradition with which I don’t have much familiarity or access, as I only really go anywhere accessible by public transit and institutions like TGI Friday’s have mostly limited their access to those displaying privilege through the possession of personal automobiles.

The ride over was as disorienting, intimidating and frightful as that Siberian bus I took from Irkutsk to Olkhon Island: Where am I going? Am I going to survive these horrible roads? There’s no way they’re going to have anything I need once I get “there.”

Once we got there, we discovered it was a popular place?! Only two seats at the wraparound bar.

I started trying to figure what to order for an aperitif (Do you think they have Pernod? Maybe Lillet?), when the townies seated next to us asked about all our strategizing.

How to explain the Gout de France to baseball-cap wearing, Bud Light drinking Baby Boomers at the TGI Friday’s bar?

“The French Government has instituted. . .”

True and somewhat relevant if not wholistically descriptive of our presence.

We went with that as I ordered a Jack with two rocks as an aperitif and the bruschetta as our cold starter.

The idea of the Gout of course is that a menu constructed within the sturdy and time-tested framework of the French-style doesn’t have to be weighed down by French ingredients and preparations, but can and should flex and expand to embrace and exploit local delicacies and delights.

How was our bruschetta an expression of the delicacies and delights of this place?

The tomatoes looked to be tomatoes in that they were tomato red, but tasted not of tomato, but of nothing really. We were consuming the image of a tomato, our memories of tomatoes and the possibilities of tomatoes, but not, a true, living, blessed tomato.

The bread: dense, life-less, not just dead, but having never lived.

For our hot starter we ordered pan-seared pot stickers: tasty and texturally interesting but with no real relationship to our previous course. And, what was that taste? MSG?

For the fish course, we had to go off menu in ordering coconut fried shrimp. And, what to say about them? They were fried. But as a course intended to reflect the delicacy and sweetness of the sea, they failed miserably. The shrimp were no more than a vehicle for their fried exterior and might as well have been tofu, soylent or a figment of my imagination.

We ordered Boneless Buffalo Wings for our main course, a dish I secretly adore for its aggressive pungence. But what is it? How does it get its distinctive color? What does it have to do with Buffalo, NY? And do these disembodied nuggets of flesh have have any relation to chickens?

The cheese course is my favorite in a traditional menu, serving as a break from the heaviness of those just passed, consumed at a leisurely pace, featuring sharp, distinctive, often new tastes.

On this night, we ordered for this purpose fried mozzarella sticks, which I suspect you’ve had before. They were not unlike our fish course, except saltier. We did not finish them.

Nor did we order a brownie obsession(r) or mudslide for our final sweet course as we had earlier discussed.

I was stuffed and unsatisfied, filled with a hunger for something more/else/alive.

And so our taste of Danvers concluded. We paid our not insignificant bill and began our not short journey home.

Our French-style menu had failed to reveal much beauty or delight, though I believe there was truth in it. Just as the framework can expose an unsung chef’s skills or a little known ingredient’s complexity, it allowed us to really taste the distinctiveness of suburban America.

Defined by price and excess, valued for appearance and conformity to an outside standard, it’s in high demand to the lowest bidder. 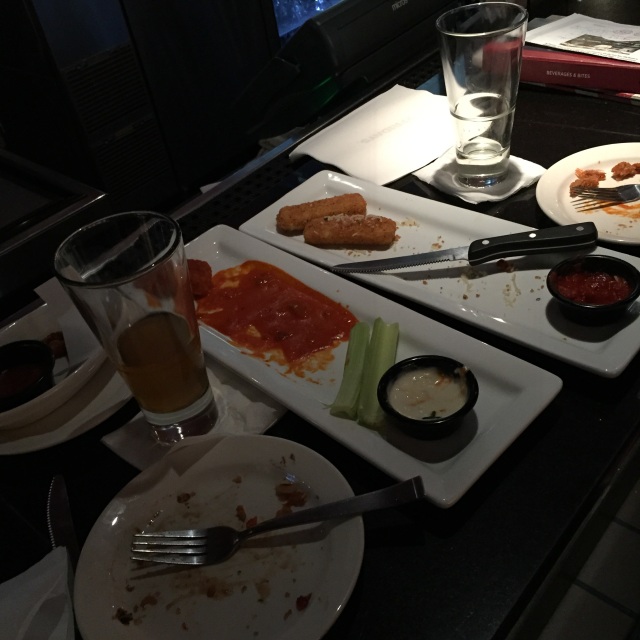